FOLLOWING THE First World War and subsequent Canadian government efforts to “enfranchise” some Indians by removing their status rights, the Six Nations (Iroquois) Confederacy appealed first to Ottawa, then to the Imperial government in London, and finally to the League of Nations in Geneva. Their request was for recognition that they were not British (Canadian) subjects, but rather independent allies of the Crown, and thus entitled to be considered as a state under the League charter in their dispute with Canada. 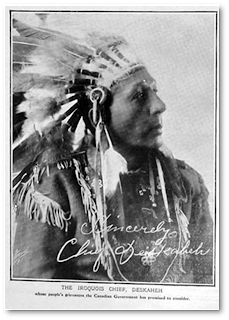 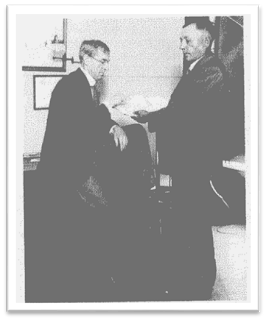 By “dressing in feathers,” they won significant support from international public opinion and the diplomatic support. Chief Deskaheh (Levi General) won the backing of the Netherlands briefly, then of Estonia, Ireland, Panama and Persia, for his appeal to the League, but British diplomats threatened to raise the case of the Dutch East Indies (Indonesia) if the Netherlands persisted, and told Persia and others that they would not tolerate “impertinent interference in the internal affairs of the British Empire.”

Canada’s Indian Affairs officials insisted that anyone born within the borders that Canada claimed for itself was automatically a subject of the Crown, and called any Six Nations claim to the contrary “absurd.” As Deskaheh wrote: “The officials wished to treat us as children and use the rod. This trouble has been going from bad to worse because we are not children.”  The RCMP evicted the traditional Six Nations Council from its longhouse soon after the League agreed to “enterrer” (bury) the appeal, but Six Nations leaders continued (and continue) to carry their case into the international arena.

This research was supported by the Social Sciences and Humanities Research Council.